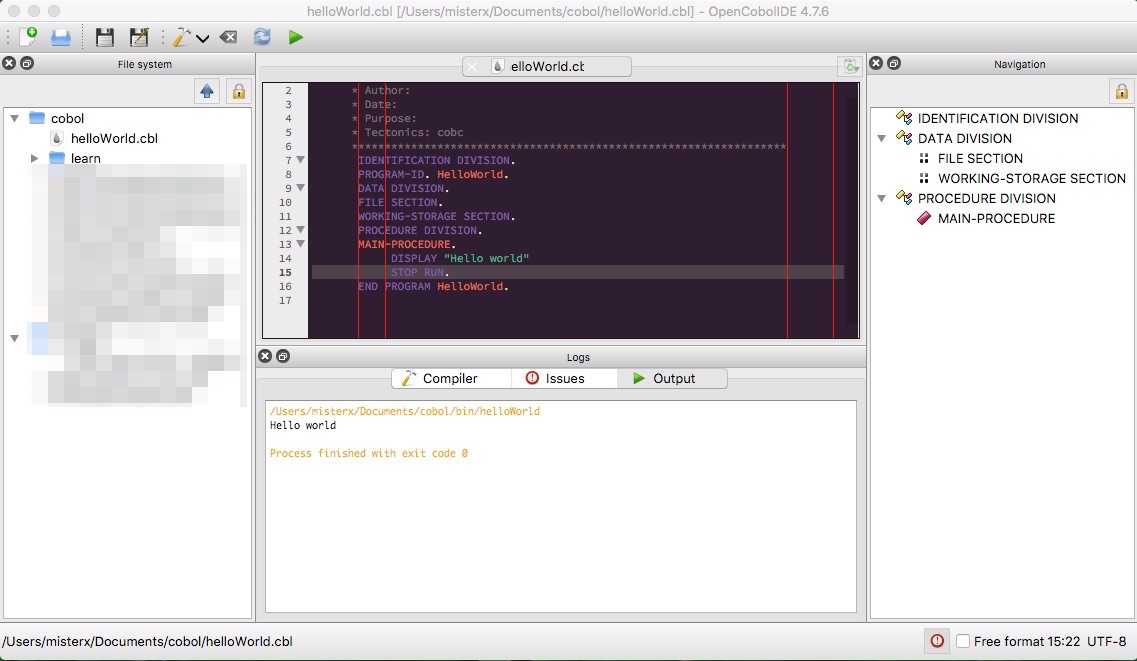 Since I am waiting for my new PC to be delivered and I am sometimes inpatient, I wanted to try some COBOL programming on my MacBook.

Knowing that COBOL is a very old language, I was prepared for some effort to get things going.

Surprisingly it was quite easy. Looking for something to train basics, I found GNU-COBOL.

GNU-COBOL is an open source implementation of a COBOL compiler available for MacOS.

Let me say this at the beginning. If you want to safe yourself the installation and just have a quick look, I found a COBOL compiler and IDE that runs in your web browser.

However, let's proceed with installing the compiler.

Open a console and type the following to install GNU-COBOL.

First HomeBrew will install dependencies for this package.

Everything went fine here. After installing the dependencies, gnu-COBOL was installed successfully.

I guess I could have stopped there, but I wanted at least a light weight IDE for COBOL.

Doing everything manually like the 7 free columns in the beginning of each line would have been a real pain.

The IDE I use is called OpenCobolIDE.

It can be installed from their website via dmg, but you need to have Python 3 installed.

The installation of python 3 via HomeBrew failed at first, since my users/local directory did not allow me to create directories in it.

It failed at the following step.

I found a solution for that.

The above creates the missing directory and allows write access.

It is not recommended to allow write access in usr/local, since it seems the OS did not allow this by default.

I installed the IDE via HomeBrew as well, since the post I found the installation instructions on suggested to do that, but I suggest you use the installer.

Now we can run OpenCobolIDE using ...